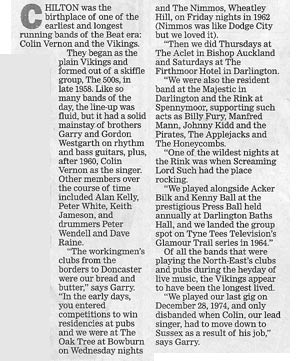 More pics and info on the Vikings kindly supplied by Garry Westgarth who wrote:

Hi Alan,
I wonder if you'd include these photos on your great site.
They pretty well represent our changes in line up from 1959 to '75.

I,ve also included the original of the Paper cutting you used ,with the article from Titos Nightclub,and wondered if it is possible to use the Photo with the article.
I've got to say "thanks" for the time and effort in compiling the site.The lads have spent happy times viewing "the opposition" from those far off days.
Very best regards,
Garry Westgarth.